Submit your Short Film to the Festival: https://lafeedbackfilmfestival.com/

A banker is on his way to work when a careless trip on a railway platform forces him to question his prejudices. 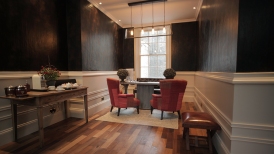